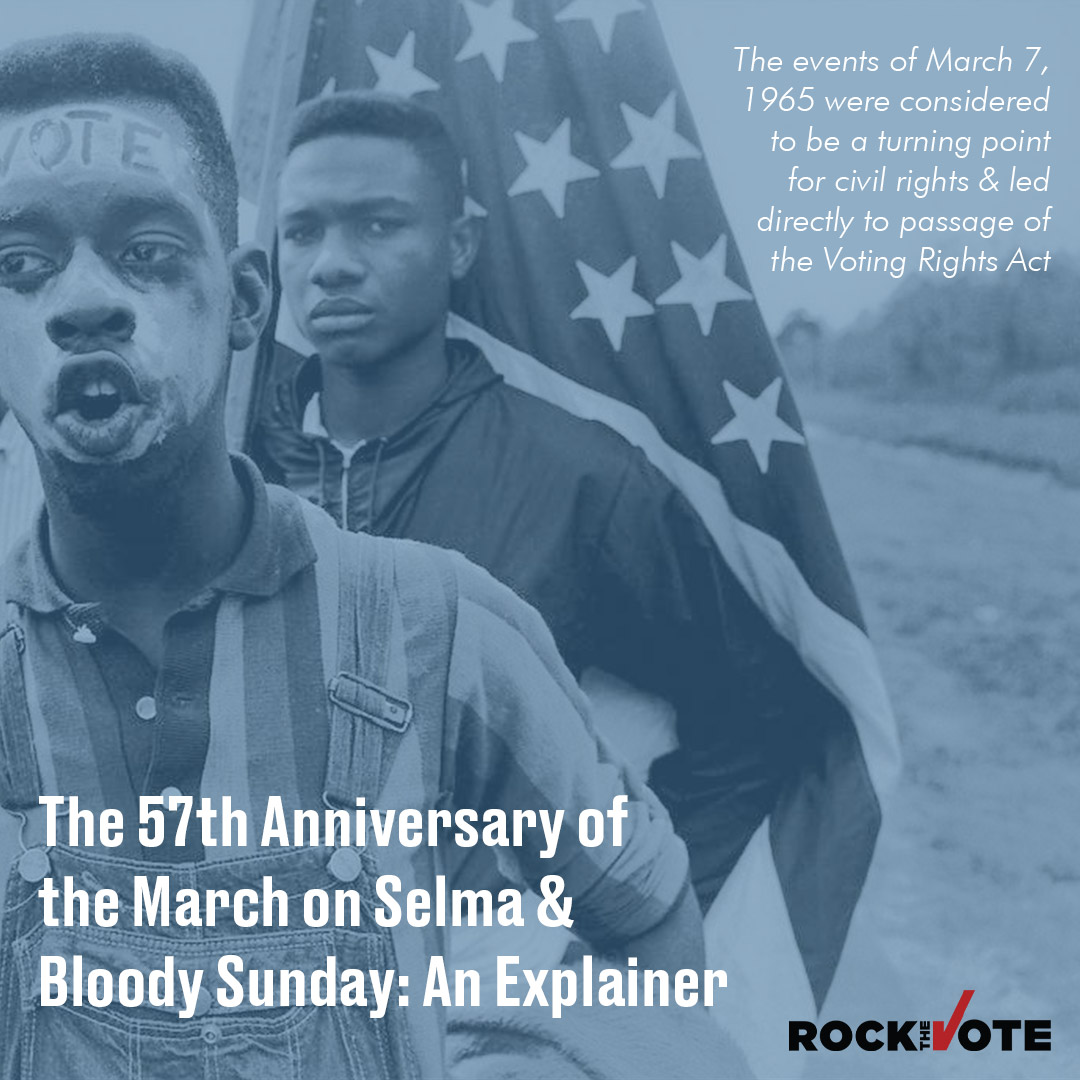 In Selma, Alabama in 1965, civil rights activists were brutally beaten by police officers while they marched peacefully from Selma to Montgomery in protest against the racist voter suppression perpetuated by the state of Alabama and beyond. The state troopers’ violent assault on the Black activists shocked the nation and would be remembered as Bloody Sunday.

What was the Freedom March?

The Civil Rights Act was passed in 1964; however, in Selma, Alabama in 1963, just 2 percent of eligible Black voters had been allowed to register to vote. The Student Nonviolent Coordinating Committee (SNCC) tried to register Black voters, but the local clerks limited voter registration opportunities, administered unfair literacy and arbitrary tests, and sometimes outright denied Black people from registering to vote.

Galvanized by the murder of Jimmie Lee Jackson, a 26 year-old protestor in Maron, Alabama, civil rights activists planned to march from Selma to Montgomery, the state capital. On March 7, 1965, 600 individuals led by Hosea Williams and — then just 19 years-old — John Lewis met at the Brown Chapel AME Church to begin the March across Alabama. Having just met with President Johnson on March 5 to discuss voting rights legislation, Martin Luther King Jr. planned to preach to his congregation on Sunday and then join the march on its second day.

Why did the Police attack the March on Bloody Sunday?

Alabama Governor George Wallace ordered his state troopers “to use whatever measures are necessary to prevent a march.”

When the protestors reached Edmund Pettus Bridge — named for a famed white supremacist and Confederate general — 150 Alabama state troopers blocked their path forward. County deputies approached the bridge from the back, effectively trapping the protestors. A crowd of white spectators gleefully waitedfor the showdown, and television journalists stood at the ready to document.

The marchers continued their path, stopping for a moment to kneel and pray. The state troopers ordered them to disperse, counted down. The state troopers put on their gas masks, pulled out their nightsticks, and attacked the crowd of peaceful protesters. The troopers sprayed people with tear gas and beat marchers with their clubs. As the people, including children, ran away back over the bridge, county deputies attacked them with clubs, whips, and rubber tubing wrapped in barbed wire. Late Congressman John Lewis suffered a fractured skull.

The violent suppression of the peaceful march from Selma to Montgomery quickly became known as Bloody Sunday.

How did Americans view the attack at the time?

Across the country, demonstrators in 80 American cities rallied in moral outrage. Two days later, Martin Luther King Jr. restarted the 54-mile march but had to turn back at the Edmund Pettus Bridge. A line of state troopers threatened to repeat their brutality against the now-1,500 to 2,000 marchers.

Several weeks later, a federal judge’s ruling allowed 300 protesters to begin the four-day journey from Selma to Montgomery escorted by the National Guard. Martin Luther King, Jr. led at least ten times that number of marchers out of Selma, whose numbers ballooned to 25,000 by the time they reached the capitol.

How did lawmakers respond to Bloody Sunday?

On March 15, eight days after Bloody Sunday, President Johnson addressed a joint session of Congress with a powerful speech that called on Congress to pass legislation that would meaningfully enforce the 15th amendment. Congress passed the Voting Rights Act of 1965 and President Johnson signed it into law on August 6, 1965.

What is the Voting Rights Act?

The Voting Rights Act (VRA) explicitly served to enforce the 15th Amendment passed almost a century prior. The 15th amendment stated, “the right of citizens of the United States to vote shall not be denied or abridged by the United States or by any State on account of race, color, or previous condition of servitude.”

In spite of the 15th Amendment, racial voter suppression continued in practice. The VRA set out to meaningfully eradicate voting policies that discriminated on the basis of race.

Section IV (4b) of the VRA created a formula to identify which states and localities had a history of racial voter suppression and would fall under Justice Department Supervision.

Section V (5) created a new rule called preclearance. This rule mandated states and localities identified by the VRA coverage formula to get approval — or preclearance — for any changes whatsoever to voting and election policies with the Justice Department.

What happened in 2013 to weaken the VRA?

Congress had renewed and amended the VRA after its passage five times, all with bipartisan support. In 2006, President George W. Bush signed the Act’s second 25-year extension. The VRA evolved to include protections for voters with language barriers or disabilities.

However, in 2013, the Supreme Court held that the coverage formula used to determine which states and localities were subject to preclearance was outdated and was therefore unconstitutional. The Court concluded that the formula in Section IV (4b) was decades old and targeted practices that had been eradicated as the country changed, and that the racial disparity in voter registration and turnout was no longer prevalent in 2013.

Without the coverage formula, the VRA’s preclearance protection is unenforceable. This means that regions with a history of discrimination no longer have federal oversight before changing their voting processes, which has opened the floodgates to voter suppression.

What can you do to help restore voting protections that activists fought for on Bloody Sunday?

Advocate for federal legislation like the John Lewis Voting Rights Advancement Act and the Freedom to Vote Act that would restore the Voting Rights Act and protect the freedom to vote for all Americans regardless of race, background, or zip code.

Learn about how your state is doing on voting rights and advocate your state legislators to expand access to democracy.

Vote for candidates who are pro-democracy and will fight for the right to vote.You can find your elected representatives contact information here if you would like to contact them.