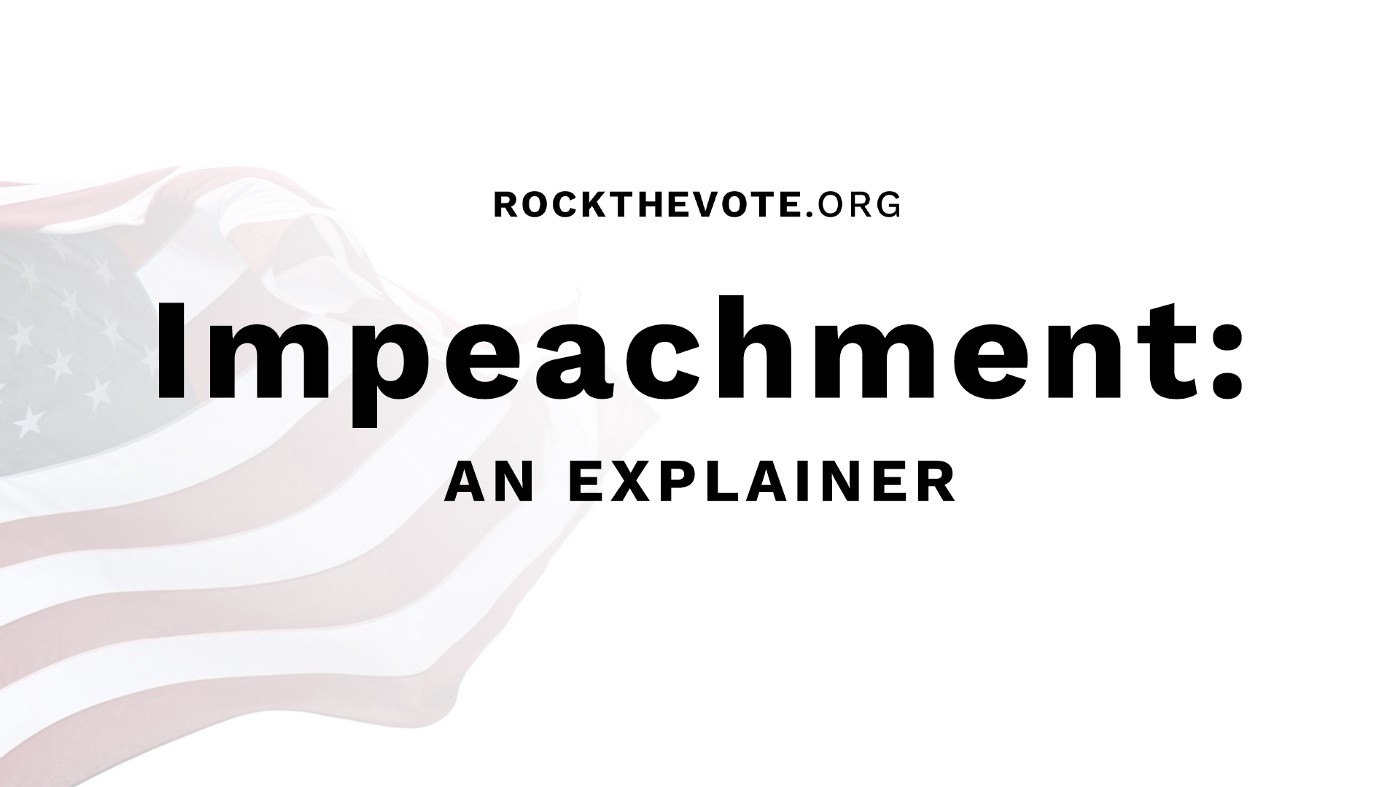 Impeachment is a constitutional process used to remove a president or other federal official from office. The reasons for impeachment given in Section 4 of Article 2 of the Constitution are “treason, bribery, or other high crimes and misdemeanors.”

The Constitution bestows the “sole power of impeachment” upon the House of Representatives (the House), and the power to “try all impeachments” upon the Senate. This means the House details the charges and offenses for removing an individual from office in a written statement called the articles of impeachment. These articles collectively are similar to an indictment in a common criminal case. It takes a simple majority to pass them and impeach the President.

Next, the Senate holds a trial with the prosecution and defense each having the right to call witnesses, perform cross-examinations and make its argument. Following the trial, the Senate deliberates and votes whether or not to convict. The Constitution mandates a two-thirds supermajority of the Senate to convict an official for impeachable crimes.

The Constitution also describes the consequences of impeachment: removal from office, disqualification from holding future government appointments, and liability to “indictment, trial, judgement and punishment” in accordance with the law.

Why are we talking about Impeachment in 2021?

On January 13th, the House of Representatives voted 232 to 197 to impeach President Trump for engaging in “high crimes and misdemeanors by inciting violence against the Government of the United States [in the January 6 Attack].” This made President Trump the first president to be impeached twice.

The Articles of Impeachment laid out President Trump’s actions leading up to Congress’ certification of electoral votes in which he “repeatedly issued false statements asserting that the Presidential election results were the product of widespread fraud and should not be accepted by the American people or certified by State or Federal officials.” On January 6, the document explains, the President gave a speech that “encouraged — and foreseeably resulted in — lawless action at the Capitol.”

Has impeachment been used to remove officials from office in the past?

Prior to President Trump’s second impeachment, the House had initiated impeachment proceedings over 60 times; however, only 20 federal officials have received enough votes to be impeached. Of the 20 impeached federal officials, the Senate has convicted and removed eight officials — all federal judges — from office. Only three have been barred from holding future governmental positions.

Previously, three presidents have been impeached — Andrew Johnson (1868), Bill Clinton (1998), and Donald Trump (2019 and 2021) — but none of these impeachments have resulted in conviction by the Senate or removal from office.

President Johnson’s impeachment came out of years of animosity between him and the Republican-led Congress. When Johnson flouted a law instated by Congress controlling executive power, the House passed 11 articles of impeachment. The Senate vote was one short of the two-thirds majority needed for conviction.

President Clinton was impeached for counts of perjury to a federal grand jury and obstruction of justice in the investigation of his extramarital affair with a White House intern. The impeachment inquiry ended with only 50 percent of Senators voting to convict.

In 2019, the House impeached President Trump for abusing presidential power by “soliciting interference of a foreign government” in the 2016 Presidential election and obstructing Congress in his refusal to cooperate with the impeachment inquiry. The Senate acquitted him, in a nearly 50/50 split predominantly along partisan lines.

What makes these impeachment proceedings unprecedented?

The current impeachment of President Trump marks the first time in history that a President or federal official has been impeached twice. Additionally, while the House impeached President Trump on January 13, 2021, the Senate was in recess until January 18, 2021. This fell just two days prior to the inauguration of President Joe Biden.

Legal scholars are debating whether a President can be convicted after he leaves office. In 1876, Congress impeached Secretary of War, William Belknap following his resignation.

The Senate will have to carry out President Biden’s confirmation hearings of nominees and economic relief legislation along with the impeachment inquiry. President Biden has discussed with Senators the possibility of confining impeachment proceedings into half-days, with remaining time dedicated to the new administration’s nominees and first 100 days’ agenda.

While the Senate would need a supermajority (two-thirds vote) to convict, it would only take a simple majority in a second vote to bar him from holding future office — with two precedents of doing so.

What can you do to protect our democracy?

– Reach out to your Senators and encourage them to vote in support of the impeachment and conviction of President Trump. You can find your Senator and their contact information here.

– Read Rock the Vote’s statement about the January 6th attack and our call to hold the President and legislators accountable for their actions.