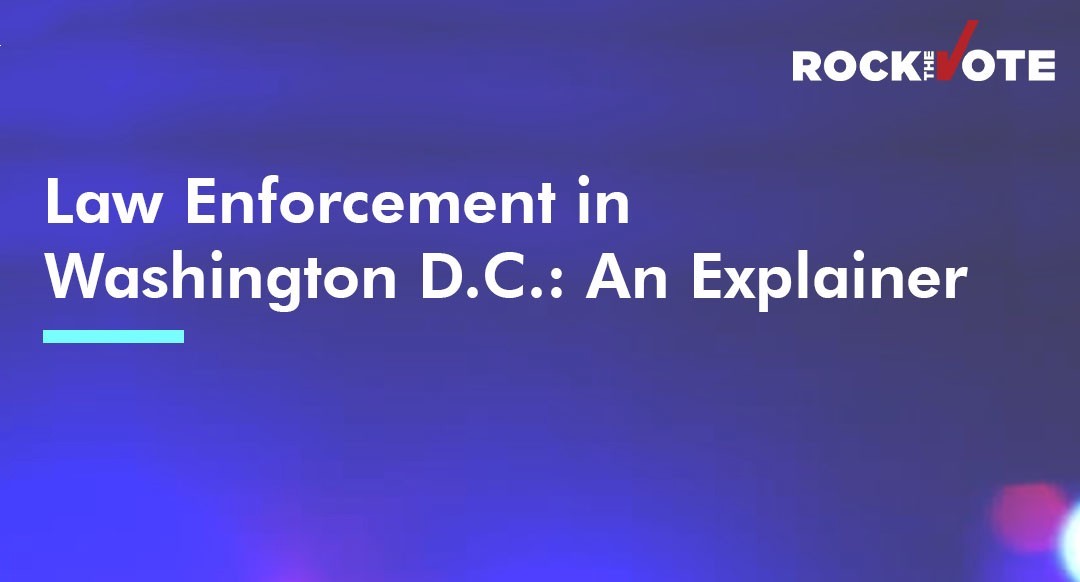 Three months after the January 6 Attack on the U.S. Capitol, enhanced security and barricades serve as a physical reminder of the ongoing threats to our democratic institutions. While alarming and tragic, isolated incidents of individual attacks and security breaches in and around government buildings are not unheard of; it is rare that an isolated incident results in the death of an officer as it did on April 2, 2021.

In contrast, the January 6th coordinated attack was unprecedented and authorities were unprepared to protect one of our most significant buildings while one of our most important democratic procedures was underway. To better understand the failed security and law enforcement on January 6, 2021, we need to first understand the complex relationship between the local D.C. government and the federal government and agencies responsible for protecting the capital of the United States.

Which law enforcement agencies are responsible for Washington D.C.’s security?

Washington, District of Columbia (D.C.) is the capital of the United States. Often referred to as “Washington”, “D.C.”, or “The District”, it houses many federal government agencies and buildings, including the U.S. Capitol Building, the White House, the Supreme Court and the federal officials who work in them, including the President, members of Congress, Supreme Court Justices, and other appointed officials.

Despite having 700,000 residents — a greater population than Vermont and Wyoming — D.C. does not have statehood. This leaves the government structure under a unique mix of federal and local control. There are more than 10 law enforcement agencies that operate in Washington, D.C, each serving a different purpose.

Which law enforcement agencies in Washington D.C. are under local control?

MPD’s 3,851 officers work under their Chief of Police and the Washington D.C. Mayor. Their jurisdiction covers 68 square miles and 700,000 D.C. residents. MPD is the closest equivalent to your local police department.

The PSD is tasked with the protection of D.C. municipal buildings and the people and resources within them. The PSD also assists both federal and municipal law enforcement in special events and criminal investigations.

Which law enforcement agencies in Washington D.C. are under federal control?

1. The U.S. Capitol Police (USCP) has more than 2,000 officers who protect the buildings in the U.S. Capitol Complex and share responsibility for the land surrounding it with MPD, the local police. The Capitol Police Board and U.S. House and Senate Appropriations and Authorizing Committees jointly authorize and oversee the Capitol Police. Officer Eugene Goodman, who was awarded the Congressional Gold Medal for saving numerous members of Congress in the Senate chamber from the rioters, is a Capitol Police officer.

2. In charge of policing all National Parks across the country, the U.S. Park Police (USPP) are the law enforcement responsible for the Memorial Parks and National Mall. The National Mall is not a real mall; it’s the land stretching from the U.S. Capitol on the East, the Lincoln Memorial on the West, the White House on the North and the area around the Tidal Basin on the South. It includes several national monuments and memorials and borders several governmental buildings. In Washington, D.C. the 300 permanently stationed USPP Officers have the same powers and duties as the D.C. Metro Police. In fact, the USPP typically fulfills the role of “the frontline law enforcement agency during protests and demonstrations in the National Mall and outside the White House.”

3. The U.S. Secret Service protects our nation’s highest elected leaders, visiting foreign heads of state, and national security events. This includes securing and protecting the buildings where these individuals are, such as the White House and the Capitol.

4. The D.C. National Guard (DCNG) is the official “protector of the District of Columbia.” Every state, as well as four territories (D.C., Guam, Puerto Rico, and the U.S. Virgin Islands), has its own National Guard, which responds to domestic emergencies. Since D.C. is a territory rather than a state, the D.C. National Guard reports directly to the U.S. President. Other states’ National Guards report to their state Governors.

5. The Federal Protective Services (FPS) is the uniformed police division of the U.S. Department of Homeland Security. They protect the physical buildings and property of the federal government, including the Capitol building.

6. The Federal Bureau of Investigations (FBI) works to prevent domestic and international terrorism and espionage; protect civil rights; and combat public corruption, significant cybercriminal and transnational criminal operations, violent crime, and white-collar crime. The Attorney General and the Director of National Intelligence jointly oversee the FBI, which is headquartered in D.C. and has about 400 offices across the country and 60 more throughout the world. The FBI is investigating and pursuing individuals involved in what it is calling the “Capitol violence.”

7. The Bureau of Alcohol, Tobacco, Firearms, and Explosives (ATF) works within the U.S. Department of Justice to protect the public from crimes related to the controlled substances and weapons included in the agency’s name. ATF is headquartered in Washington, DC with 25 offices across the country and 12 across the world. ATF agents were involved with the January 6th insurrection because many rioters were carrying firearms and some planted the pipe bombs placed around the Democratic and Republican party headquarters in D.C.

8. The U.S. Marshals Service, the first federal law enforcement agency in the U.S., is a bureau within the U.S. Department of Justice that serves as the enforcement arm of the federal courts, including 94 U.S. District Courts and 12 circuits of the U.S. Court of Appeals. Marshals enforce decisions made by judges and justices in court decisions in addition to protecting the federal judicial process, including protecting federal judges, court officials, witnesses, jurors, the visiting public, and prisoners. For example, after the Supreme Court decision Brown v. Board of Education held that racial segregation in public schools was unconstitutional, U.S. Marshals protected Black students integrating into public schools. U.S. Marshals often support MPD and the Secret Service at large D.C. events, such as Inauguration Day.

How did the agencies prepare for the January 6th Insurrection?

D.C. Mayor Muriel Bowser originally organized the law enforcement response leading up to January 6, 2021. Directed by the U.S. Constitution, in a Joint Session, the U.S. Congress was scheduled to count the 2020 Election’s Electoral College ballots. Then-President Donald Trump announced a rally to oppose the certification. In the days before, D.C. officials estimated “a stadium-sized crowd” would attend the rally.

The local DC Metro Police Department (MPD) planned to coordinate with the federal agents of the U.S. Capitol Police (USCP), U.S. Park Police (USPP), and the U.S. Secret Service to cover the protests. As typical preparation for large planned demonstrations in D.C., USPP called in additional officers from New York. Mayor Bowser requested that the D.C. National Guard only support with a minimal presence.

According to Vox, “the entire Capitol Police force — around 1,500 officers — was on duty [the day of the riot].” They were supported by 1,000 MPD officers in the area. Additionally, 50 Homeland Security officers working in an FPS capacity stood by in the Ronald Reagan Building just over a mile from the Capitol Building. USPP SWAT members were also stationed near the Capitol and the White House.

Which of these agencies came to the aid once the Capitol was breached on January 6?

The moment the mob breached the Capitol, breaking through police barricades in a coordinated attack to overrun law enforcement lines, U.S. Secret Service Headquarters issued an emergency alert calling all Secret Service agents to help secure the Capitol. A similar alert was sent over the police mutual aid radio system used by all federal, state, and municipal law enforcement agencies in the Washington, D.C. region.

Agents from the FBI and the Bureau of Alcohol, Tobacco, and Firearms responded with reinforcements. Officers and the National Guards from the neighboring states of Virginia (at 3:30 p.m.), Maryland (at 3:47 p.m.), and New Jersey (at 4:57 p.m). were also deployed. By 5:45 p.m., after nearly four hours of rioting and looting, officers from the various agencies had established a security perimeter around the Capitol.

Beyond turning down reinforcements in the days leading up to the attack, Mayor Bowser and the U.S. Capitol Police refused the FBI’s offer of aid again as the mob descended. In addition, the U.S. Park Police were only able to send a few officers to the Capitol because USPP officers were responding to a related attack on the Washington Monument.

Despite the presence of multiple law enforcement agencies, the protests escalated to riots that breached the perimeter of the U.S. Capitol, suspended active debate as Congress fulfilled its obligation under the Constitution, and threatened the lives of members of Congress, their staff, members of the press, security officials and others in the building.

Largely avoiding the use of their weapons, security and law enforcement officers retreated. Many have argued that structural racism within the ranks of law enforcement contributed the light-handed response that allowed the breach and continued attack on our nation’s Capitol.

What was unique about the response?

While state Governors have the power to mobilize their National Guard units within their state, as a territory, D.C. cannot mobilize its National Guard without federal approval. Normally, the commander of the DCNG has the authority to respond to rapidly developing, dangerous situations when there is no time to get approval from headquarters, but the Pentagon removed that authority in preparation for the January 6 rally. Questions remain about the origin and timing of this new protocol as well as if and how clearly it was communicated to other law enforcement and security agencies in the area ahead of January 6th.

As a result, the Capitol Police Chief Steven Sund filed a formal request for DCNG support, which was submitted at 1:49 PM. The mob had already breached the Capitol and approval by the Secretary of Defense Office was still pending. The multiple steps of the bureaucratic process could have been expedited by the President; however, President Trump initially refused to authorize the D.C. National Guard to secure the building and to protect those trapped inside. Members of the DCNG finally arrived at the Capitol almost four hours later at 5:30 p.m. despite dozens of soldiers already on standby as a quick response force.

The insurrection caused $30 million in damages to the U.S. Capitol Building, halting the democratic process enshrined in the Constitution. The rioters threatened law enforcement officers, members of Congress, staff, and press inside, resulting in five deaths, dozens of hospitalizations, and untold psychological trauma.

In addition to the unnecessary and unusual DCNG approval process, the response to the January 6th assault clearly laid bare the truth that there are two Americas — one that protects and gives aid or comfort to a violent mob of white weaponized vigilantes fueled by conspiracy theories and one that brutalizes and kills Black nonviolent marchers calling for justice in the murders of community members.

What can we do to help make sure this doesn’t happen again?

1. Investigation and Accountability: Rock the Vote has called for an investigation into the failed security that enabled a rebellious mob of white nationalists to engage in this insurrection and to hold individuals accountable.

2. Statehood for Washington, D.C.: The handling of the Capitol riots has led to renewed calls for D.C. statehood to ensure fair representation and authority to make decisions that protect its community. D.C. Statehood is a civil rights issue, particularly as the District is majority-minority and its residents do not have the same rights as those in other parts of the country. Reach out to your Senators and Representatives and encourage them to support D.C. statehood. You can find your federal representatives and their contact information here.

3. Justice and Police Reform: offices like Sheriff, District Attorney, and Mayor — which play a crucial role in determining criminal justice and policing decisions made in your community — are elected at the Municipal level. Make sure you use your voice and vote if your community has local elections this year by signing up for election reminders here.