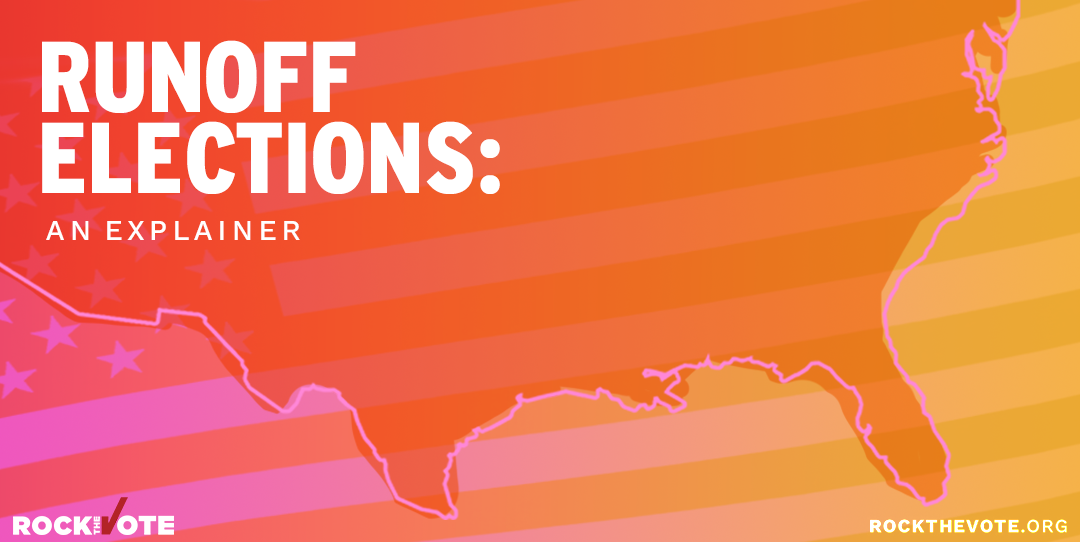 What is a runoff election?

In some elections, a candidate must win a plurality — the most votes — AND the majority of votes — earning more than 50% of the vote — to be certified as the winner.

In races with multiple candidates, it can be difficult for one candidate to earn over 50% of the votes as votes are split between all of the candidates. Thus, a candidate may receive the plurality of votes but not the majority of votes. A runoff election is a second election between the top two candidates when no candidate meets the criteria for winning in the first election.

Some states have a threshold lower than 50% that the winning candidate must reach or the state may hold a runoff if two candidates tie.

What’s the history behind runoff elections?

The history behind most state laws are rooted in attempts to retain white political power. The Department of Interior describes how Georgia’s runoff law, which was created in the midst of the civil rights movement in the 1960s, was an attempt to protect white political power in a white-majority state by requiring a majority-vote (over 50%).

The fear was that, in a multicandidate race where votes are split between candidates, a Black candidate could more easily win a plurality of the vote if multiple white candidates ran. White factions that existed in primary elections could unite in a runoff election to support one candidate and reduce the chances of winning for any candidate who was favored by Black communities or other communities of color in the South.

Are there other reasons why runoff elections are problematic?

Runoff elections suffer from voter dropoff meaning fewer voters cast a ballot in runoffs than in general elections. General elections are more widely promoted with multiple offices up for election as well as ballot measures so voters are generally just more aware and motivated to turnout in a general election. In addition, runoffs often occur during the holiday season between mid November and early January, which is already a busy time of the year for most voters.

This dropoff in voter turnout is particularly true among already underrepresented groups such as young voters, voters from communities of color, voters with disabilities, and voters from low-income backgrounds. As a result, a small, nonrepresentative group makes outsized decisions that affect the rest of the community.

Are there any counter arguments for runoff elections?

Some argue runoff elections eliminate what some consider “wasted’’ votes and encourage more diverse candidates to run in a general election; however, implementing a policy such as rank-choice voting would be a better solution to this argument than runoff elections.

What’s at stake in runoff elections?

With highly competitive races, it’s likely the winner will be decided by a very small margin so it’s critical every voter’s voice be heard.

Runoffs that affect federal offices such as those for the Senate or House of Representatives may get national attention if power in either chamber is close and the outcome of a runoff election could change which political party has power.

Where do runoff elections happen?

Runoff elections are almost exclusively in the South. Each state has different criteria for holding a runoff election, such as:

States that have some form of runoffs for statewide and/or federal offices in primary and/or general elections, include: Alabama, Arkansas, Georgia, Louisiana, Mississippi, North Carolina, Oklahoma, South Dakota, Texas and Vermont.

If an eligible voter tried to vote in the General Election, but they had to use a provisional ballot or their ballot was contested, the voter should identify the issue and make sure it is resolved for the runoff election. For example, an eligible voter may need to make sure their voter registration is active and current before the runoff election.

If a young person turns 18 after the general election, but before the runoff registration deadline, they are eligible to register and vote in the runoff election. If the deadline has passed, check to see if your state offers same day registration.

What else do voters need to know to prepare to vote in a runoff?