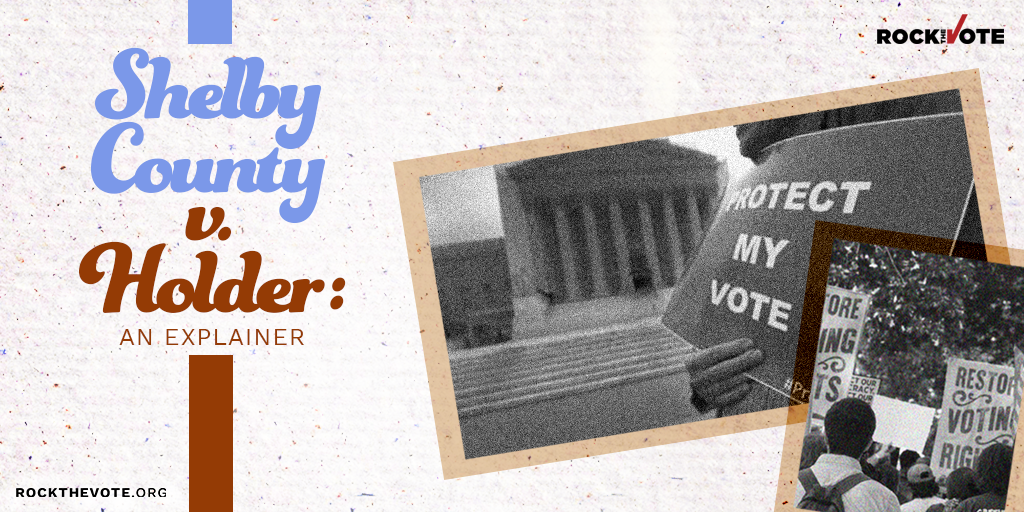 What is Shelby County v. Holder?

The decision, made on June 25, 2013, held that a key part of The Voting Rights Act of 1965 (the VRA) was unconstitutional and put it on Congress to update the legislation. Without the full protections of the VRA, state and local governments with a long history of discrimination are free to adopt election policies that they have not been able to in decades. This is part of the reason for the wave of voter suppression laws over the last several years given the Court’s decision is less than 10 years old.

The Constitution of the United States does not explicitly grant the right to vote. Rather, the 15th, 19th, and 26th Amendments prevent discrimination of citizens’ right to vote based on prior servitude, race, belief, color, ethnicity, sex, and age of those who are at least 18 years old. Basically, if voting rights are extended to one group of people, they can not be denied to other groups of people.

The 15th Amendment was passed in 1870 stating that the U.S. federal and state governments shall not deny the right to vote on account of race, color, or previous condition of servitude. Despite the 15th Amendment, states and local governments implemented various discriminatory practices, such as poll taxes and literacy tests, Jim Crow laws, intimidation and outright violence to prevent Black Americans from voting.

What is the Voting Rights Act of 1965 and why is it important?

The Voting Rights Act (VRA) was signed into law by President Lyndon B. Johnson on August 6, 1965, to protect the voting rights of Black citizens. It outlawed the use of discriminatory voting practices.

It also required jurisdictions with a history of discriminatory voter suppression to seek preclearance from the federal government before creating any new voting practices or procedures. Essentially, state and local governments that had a history of abuse had to ask the federal government, the Department of Justice, for permission before they made any changes to the way they administered elections. Federal Examiners with the power to register citizens were also assigned to these counties.¹

It’s widely considered to be the most effective piece of civil rights legislation in US history.²

What were the strengths of the VRA?

While the VRA had a lot of strengths, two key parts were critical: Section IV (4b) and Section V (5).

Section 4b established a formula to determine which states and localities demonstrated a history of voting rights violations.

Section V (5) required the jurisdictions identified by this formula to obtain “preclearance” from the federal government, by way of the Department of Justice, before making any changes to their voting laws.

Congress renewed and amended the VRA after its passage five times, all with little opposition. In 2006, President George W. Bush signed the Act’s second 25-year extension. The VRA went on to include protections for voters with language barriers or disabilities.

Under the VRA states such as Alabama, Alaska, Arizona, Georgia, Louisiana, Mississippi, South Carolina, Texas, and Virginia, as well as counties in California, Florida, Michigan, North Carolina, South Dakota, and New York, were obligated to submit election plans to either the Justice Department or a Federal Court to prevent voter suppression, especially on the basis of race.

How did Shelby County v. Holder “gut” the VRA?

In 2010, Shelby County, Alabama challenged the VRA’s preclearance clause in a lawsuit against the Justice Department (then led by Attorney General Eric Holder).

In a 5–4 decision, the Supreme Court held that the Section IV (4b) formula used to determine which states and localities were subject to preclearance was outdated and was therefore unconstitutional.³ The Court concluded that the formula in Section IV (4b) was decades old and targeted practices that had been eradicated as the country had changed and the racial disparity in voter registration and turnout was no longer the case in 2013.

Without the formula, Section V (5) is unenforceable. This means that regions with a history of discrimination no longer have federal oversight before changing their voting processes.

The dissenting justices argued that discrimination and racial disparities had not disappeared. Justice Ruth Bader Ginsburg wrote in her dissent, “Throwing out preclearance when it has worked and is continuing to work to stop discriminatory changes is like throwing away your umbrella in a rainstorm because you are not getting wet.”

How can we reinstate the Voting Rights Act’s Preclearance Clause?

The goal was for Congress to update and strengthen the criteria to meet modern needs, yet it has not been updated and, therefore, no new formula has been put in place. Since then, states and localities — both those that had been covered by the VRA and others who hadn’t — have been able to pass discriminatory laws, shut down polling sites, and amend pre-existing laws without oversight.

What do we need?

While the Court may have found that the coverage formula was no longer responsive to modern circumstances, that the country had changed, so too have the methods of voter suppression.⁴ The mechanisms are no longer grandfather clauses and literacy tests. They are, however, much more subtle.

Modern voter suppression tactics include voter ID requirements (which minorities are far less likely to possess), limitations on early voting and vote-by-mail, and closure and movement of polling places in minority communities.⁵ Not only does the Voting Rights Act preclearance clause need to be reinstated to protect every citizen’s right to vote, but the criteria need to be expanded to cover more jurisdictions and these modern forms of voter suppression.

Even before Shelby County v. Holder, states without preclearance requirements were able to pass voting restrictions that disproportionately affect minorities, elderly people, and low-income communities. For example, in 2010, Wisconsin passed stricter voter ID laws and gerrymandering policies.⁶ Stricter voter ID laws can make it difficult for students to vote, since their school address may not match the address on their drivers license or ID. LGBTQ+ Americans can also be turned away from a polling site if their gender identity does not match their official ID. Other states have shortened and limited access to early voting or absentee ballots, which restricts the access that citizens with disabilities or elderly voters have to the polls. Since the original enactment of the Voting Rights Act, voter suppression has evolved, creating an urgent need for more comprehensive and strict legislation.

How does this affect elections?

Since the decision is not that old, we have yet to see its full consequences; however, an increase in restrictive voting rights and interfering election laws sound alarms. We lose power in our democracy as time continues and laws reduce our freedom to vote and undermine our elections.

Voter suppression chips away at the already small margins of victory in elections. It determines who can or does vote with the intention to determine the outcome of an election.

Stricter voter ID laws (such as those passed in North Carolina and Texas immediately following the Shelby County decision) have made it harder for minorities, elderly and low-income people, students, and other groups to vote.⁷ Though non-profit organizations like the ACLU can challenge such practices in court, this process can take several years and elections before a decision is reached.

During this time, elections are held with policies that can later be found to be discriminatory. Yet, our system is not really designed to unravel elections once they have been decided.

Should we be worried about voter suppression in the future?

Absolutely! Without Justice Department protection from the VRA, many forms of voter suppression persist that otherwise might have been blocked. And many of those who are barred from voting are minorities, young, and/or disabled.

Further, while many countries automatically put citizens on the voter rolls, registering to vote in the United States is a cumbersome, opt-in process. At polling places, shortages of equipment and poll workers often force voters, especially Black and Brown voters, to wait in excessively long lines.

The state of Kentucky previously collapsed 320 polling places that were in predominantly Black counties. Now, only one exists. Moreover, one study of the 2016 election found that voters in black neighborhoods waited 29 percent longer on average than voters in white neighborhoods.⁸ Even after waiting in line, many Americans are barred from voting because they lack a photo ID or were erroneously purged from voter rolls.⁹

Following record voter turnout in the 2020 election despite it being held in a pandemic, saw a number of states introduce and pass laws designed to suppress certain groups of voters and undermine elections.

Many of these laws and practices would have been prevented if the Voting Rights Act were working as it was designed to. But there are actions we can take:

What can I do to protect voting rights?

If our votes weren’t powerful, they wouldn’t be trying to take them away.