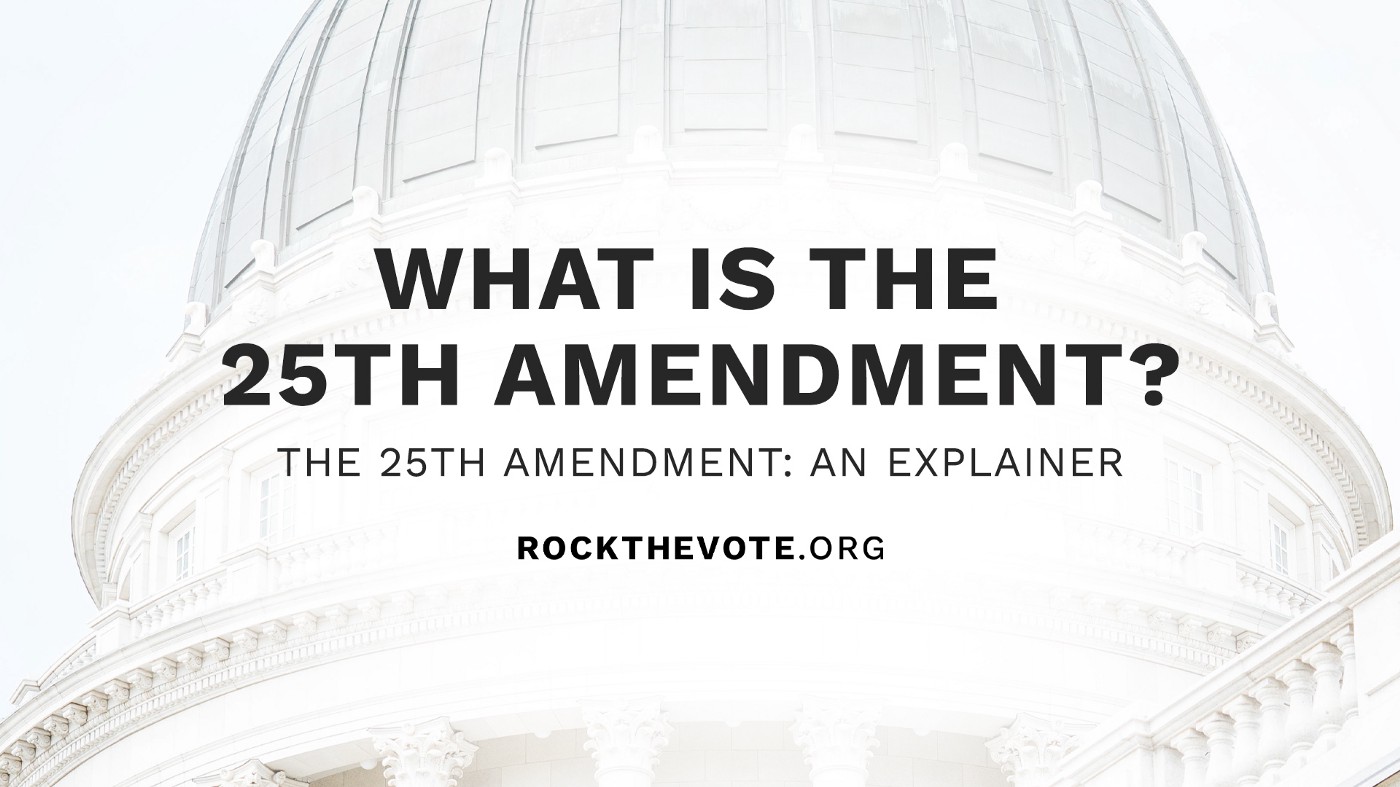 Ratified in 1967 following the assassination of President Kennedy, the 25th Amendment to the Constitution established the Presidential line of succession; set forth a process by which the Vice President could temporarily take over as Acting President; and created a means for the President to be removed from office if they became unfit to serve. Paragraph 1 of Section 4 reads as follows:

The President is elected to serve the American people. An invocation of the 25th Amendment is a constitutionally-prescribed safeguard to hold our nation’s highest elected officials accountable in the gravest of situations.

Why invoke the 25th Amendment now?

On the afternoon of January 6, 2021, the two houses of Congress gathered in a joint session to certify the Electoral College votes from all 50 states. Although this quadrennial certification is largely ceremonial, President Trump presented it to his supporters as a last opportunity to overturn the results of the 2020 Presidential Election.

President Trump lost both the Electoral College and the popular vote in a decisive and repeatedly-verified election in which the American electorate, particularly marginalized, young voters, overcame barrier after barrier to use the most powerful nonviolent instrument to create change and breakdown injustice — the vote. The President, however, refused to accept that millions of Americans, led by young voters, elected President-Elect Joe Biden by overwhelming margins.

Pro-Trump supporters gathered on the National Mall on January 6, the day Congress was to certify President-Elect Biden’s victory. Immediately following a speech by the President in which he encouraged his supporters to make their opposition to the certification heard, a violent mob broke into the U.S. Capitol. This invasion forced lockdowns and evacuations of Congress, overran and vandalized the Capitol building, and temporarily halted the certification of the Electoral College votes. As of the writing of this explainer six people, including two Capitol Police officers, died as a result of the attack and several remain hospitalized.

For hours, President Trump refused to condemn the violence or call in the National Guard to stop the assault. In a video published hours after the attack began, he continued to make false claims about the election. The unprecedented and unpatriotic actions of the President and his supporters have led to bipartisan calls in Congress as well as discussions by Cabinet members over invoking the 25th Amendment.

After President Trump incited an armed insurrection on his own government, legislators from both parties are saying that he not only is unfit to serve, but also is a threat to both our democracy and our national security. Numerous lawmakers, including Speaker of the House Nancy Pelosi and incoming Senate Majority Leader Chuck Schumer, are calling for Vice President Pence to invoke the 25th Amendment to remove Trump from office to ensure a peaceful transition of power and safeguard our democracy.

Has the 25th Amendment ever been invoked?

What would invoking the 25th Amendment entail?

Vice President Mike Pence and a majority of the Cabinet members would need to agree the President is unfit for office. President Trump may dispute the claim in a letter to Congress. If he disputed the claim, Pence and the Cabinet would have four days to make a counter-argument. Then, Congress would vote.

A two-thirds supermajority of both chambers of Congress — the House and the Senate — must vote in favor of the President’s removal and put the Vice President in charge. Vice President Pence would take over as acting President and assume duties of the office through noon on January 20, 2021 when power would be transferred to President-Elect Joe Biden.

Since the January 6th attack on the Capitol, several members of the Trump Cabinet have submitted their resignations, further complicating the process for Cabinet officials to garner a majority.

Can President Trump run for office again if he is removed with the 25th Amendment?

Removal by the 25th Amendment would not, by itself, preclude the President from running for or holding office in the future. Impeachment, however, could do so.

What can you do to protect our democracy?

1. Reach out to your Congressional Representatives and encourage them to publicly support the invocation of the 25th Amendment. You can find out who represents you and how to contact these officials here.

3. Reach out to your Congressional representatives and encourage them to vote in support of the impeachment and conviction of the President.