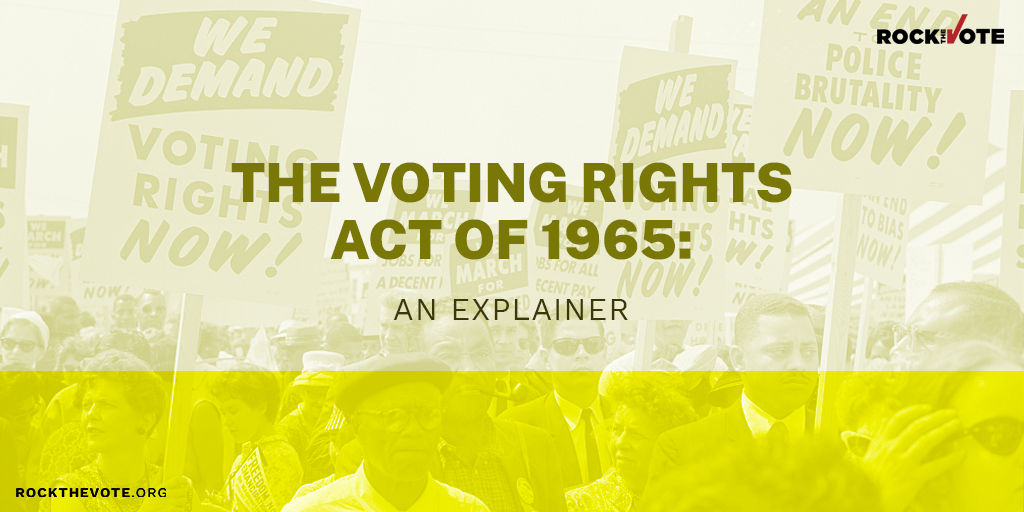 The Voting Rights Act of 1965 (VRA), signed into law by President Johnson on August 6, 1965, is considered the Crown Jewel of the Civil Rights Movement and the most effective piece of civil rights legislation in US history.

The VRA was renewed, expanded, and strengthened by Congress in 1970, 1975, 1982, and most recently with a unanimous vote in the Senate in 2006 under a Republican President, George W. Bush.

Why was the Voting Rights Act of 1965 needed?

Following the Civil War, in 1870, the 15th Amendment was passed making it unconstitutional to deny the right to vote to a person based on race, color, or previous servitude. In other words, Black men were supposed to be granted the right to vote. (This was before discrimination against women was prohibited)

Despite passage of the 15th Amendment, people of color continued to be disenfranchised for nearly 100 years through Jim Crow Segregation until the VRA. States and local governments used loopholes to prevent Black Americans from voting that were not explicitly characterized on the basis of race. Examples of these discriminatory practices included poll taxes, literacy tests, all-white primaries, grandfather clauses, intimidation and outright violence.

While The Civil Rights Act passed in 1964, Black citizens still faced opposition to vote in the 1964 presidential election. Thousands of demonstrations, including the Selma-to-Montgomery March in 1965, led by Congressman John Lewis and Martin Luther King Jr. pressured the federal government to pass The Voting Rights Act.

The Voting Rights Act of 1965 established proactive, concrete protections for the right to vote that were supposed to be enshrined in 1870.

What were the strengths of the VRA?

Essentially, state and local governments that had a history of voter suppression had to ask the federal government, specifically the Department of Justice, for permission for any changes to the way they administered elections. These governments could make changes to their policies; they just needed to prove that the laws would not discriminate against people of color.

What else did the VRA do?

The VRA is a comprehensive piece of legislation that included many provisions to enforce and protect the right to vote, including:

What states and localities were required to get preclearance?

As the VRA was expanded to include protections for other groups who faced discrimination while trying to vote, additional jurisdictions were included. States like Alabama, Alaska, Arizona, Georgia, Louisiana, Mississippi, South Carolina, Texas, and Virginia, and local governments in California, Florida, Michigan, North Carolina, South Dakota, and New York eventually fell under the Act’s requirements.

What is the current status of the VRA?

Recent U.S. Supreme Court cases in 2013 and 2021 severely weakened the VRA by effectively halting the preclearance process to proactively prevent discriminination and by making it harder to challenge voter suppression.

What happened in the Supreme Court Case in 2013?

In 2013, Shelby County, Alabama wanted to make changes to its practices and challenged the VRA’s requirement for preclearance. Then U.S. Attorney General Eric Holder represented the U.S. Justice Department in the case Shelby Co. v Holder.

Without the formula, no states or localities are required to seek preclearance. Thus, the preclearance requirement in Section V (5) is effectively unenforceable. This means that places with a history of discrimination no longer have federal oversight before changing their voting processes. The Shelby v Holder decision gutted the VRA by significantly reducing its power to prevent the passing of discriminatory election laws.

In her dissent, Justice Ruth Bader Ginsburg wrote, “Throwing out preclearance when it has worked…is like throwing away your umbrella in a rainstorm because you are not getting wet.”

What does this mean in practice?

The Shelby v Holder decision opened the floodgates to voter suppression laws that have not been seen since before 1965. It means that places with a long history of voter suppression are able to pass laws that discriminate against voters. It means protections that were in place from 1965 to 2013 no longer exist.

Without the protections of preclearance, suppressive tactics have to be fought in court, often after they have been implemented. In many of these cases, the damage is done as elections are held with voters’ rights being suppressed and we do not have a system to correct elections that have been held in which voters’ rights were violated.

What happened in the Supreme Court Case in 2021?

In Brnovich v Democratic National Committee, the Democratic National Committee challenged the state of Arizona, represented by Arizona Attorney General Mark Brnovich, on two provisions: 1) voters who cast their ballot at the wrong precinct would have their entire ballot thrown out even for elections where the precinct didn’t matter and 2) increased restrictions on vote-by-mail ballots being turned in on behalf of a voter by their nonrelative neighbor or friend.

U.S. Court of Appeals, 9th Circuit Court found policies to be discriminatory. For example, Arizona has one of the largest Native American populations of any state in the country. A brief filed by the Navajo Nation, argued, “Arizon­a’s ballot collec­tion law crim­in­al­izes ways in which Nava­jos histor­ic­ally parti­cip­ated in early voting by mail. Due to the remote­ness of the Nation and lack of trans­port­a­tion, it is not uncom­mon for Nava­jos to ask their neigh­bors or clan members to deliver their mail.”

In a 6-3 decision, the Supreme Court found the burden on voters of color and Native voters to be too little or “too modest”. The Court acknowledged discrimination exists, but basically said that it was ok so long as there’s not too discrimination.

The Court also stated challenges to the State’s policy should be considered in the context of the State’s entire voting system meaning that as long as there’s an alternative option, racially discriminatory practices might be ok.

While federal courts have historically played a critical role in protecting voting rights for all Americans, the ruling makes it significantly more difficult to challenge voter suppression and indicates that The Supreme Court will no longer protect voters or our democracy. It will require the legislative branch – Congress.

What can we do to restore the VRA?

Hold our elected leaders accountable. The more time that goes by without the protections of the VRA, the more rights we risk losing.

The Senate has failed to reinstate the VRA with the filibuster obstructing passage.In fact, many Senators who voted to expand the VRA in 2006 continuously vote against similar legislation today. We need to call on Congress and put pressure on our Representatives and Senators.

The John Lewis Voting Rights Advancement Act is crucial to restoring the VRA to protect the right to vote of all Americans regardless of race, background, or zip code

Does this have anything to do with elections?