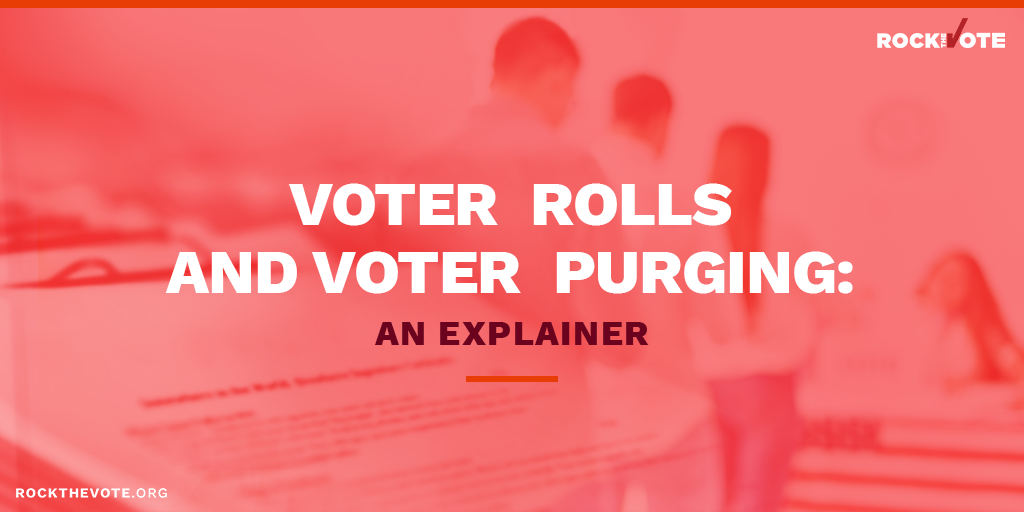 What are voter rolls?

Voter rolls are voter registration lists – the list of actively registered voters who can vote in an upcoming election within a particular jurisdiction. The list of registered voters is incredibly important as it informs whether or not a voter can cast a ballot based on whether their name appears on the list. Voter rolls are maintained by local and state governments.

What does voter roll maintenance or cleaning of voter rolls refer to?

Because of the importance of these lists, states are required to keep voter registration rolls as accurate and up-to-date as possible. This is called voter roll list maintenance or cleaning the voter rolls.

Why is it important to keep voter rolls accurate and current?

Keeping voter registration rolls accurate and current is critical to efficient and secure elections. The benefits of having accurate registration lists include:

What’s the process to maintain lists?

Maintaining lists is not a simple process. The challenge is in making sure the list is accurate and current while not inadvertently canceling an eligible voter’s registration and taking away their right to vote.

There are federal and often state policies in place to regulate some ways in which lists are maintained, most notably the National Voter Registration Act of 1993 (NVRA) and the Help America Vote Act of 2002.

While not an official federal agency, the Electronic Registration Information Center (ERIC) is a public nonprofit composed of 33 states and DC to help states improve the accuracy of voter rolls and increasing access to voter registration for all eligible citizens. ERIC helps states utilize best practices in maintaining their voter rolls.

Who can be removed from the lists?

The NVRA limits the reasons a state may remove a voter from the rolls, including:

All but six states (Idaho, Minnesota, New Hampshire, North Dakota,  Wisconsin and Wyoming ) are subject to the requirements of the NVRA.

While the NVRA establishes standards, it does not require states to follow specific procedures for identifying and removing voters in the cases of death, felony conviction, or adjudication of mental incapacity.

The NVRA does, however, require a notification process for identifying and removing voters believed to have moved.

What is the process for identifying and removing voters believed to have moved?

First, a forwardable notice with a pre-addressed, postage-paid return card is sent to registrants whose address has changed

If the voter returns the card, their record is either updated with the new address or deleted if the voter moved out of the jurisdiction.

If the voter does not return the card, states have the option to designate the registrant inactive. The record can only be removed if the voter fails to vote or tries to vote in an election between when the notices were sent out and the second federal election after the notice was sent.

Why is it controversial to cancel a voter’s registration if they have skipped voting in several elections?

Under federal law, voters have a right to choose not to vote and are not to be penalized for skipping elections. There are several reasons a voter may have skipped multiple elections. Voting is not a use it or lose it right.

What are voter roll purges?

While there are best practices for list maintenance and the Electronic Registration Information Center (ERIC) helps states utilize those best practices, voter purges are when states use flawed processes, such as irresponsible use of bad data or practices that confuse two voters as the same person if they share a name.

This results in the mass cancellation of the registrations of eligible voters, with little notice. Often, these voters only learn their registration was canceled when they try to go vote and they are either turned away or have to cast a provisional ballot.

Voter purges have significantly increased since the 2013 Supreme Court decision in Shelby v Holder, which gutted the Voting Rights Act of 1965. States with a long history of discrimination no longer have to get permission before changing their election processes or policies.

As a result, several states have engaged in voter purging under the guise of cleaning voter rolls.

How many people have been purged from the rolls?

Are certain people purged more than others?

Voter purges disproportionately affect voters of color. While several states are engaging in voter roll purging, the purge rate is significantly higher in jurisdictions previously covered by The Voting Rights Act of 1965. In other words,state and local governments with a history of discrimination are purging voters at higher rates.

Why do I need to check my registration status?

Since 2013, tens of millions of voters have had their registrations canceled in voter roll purges. It is crucial that voters check their voter registration status to confirm it is active and up-to-date with their current address ahead of each election’s voter registration deadline.

If voters discover their registration has been canceled they still have time to register ahead of deadlines to ensure they can cast a ballot in the next election.

Where can I check to see I’m still registered to vote?

What can we do to stop states from abusing their power and purging voters off the rolls?

Elect pro-voter candidates at every level of government who believe in democracy and hold them accountable. Pay special attention to your secretary of state election as they are often the chief election officers in the state and are in charge of maintaining the voter rolls.

At the federal level, we need Congress to restore the Voting Rights Act of 1965. The John Lewis Voting Rights Advancement Act is crucial to restoring the VRA to protect the right to vote of all Americans regardless of race, background, or zip code. Contact your U.S. Representative and Senators to let them know where you stand.