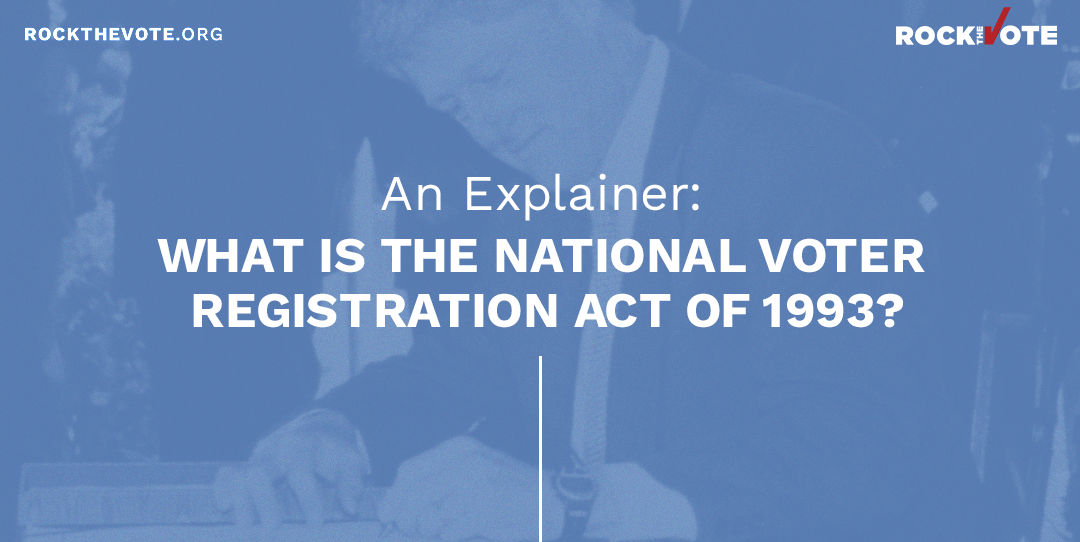 What is The National Registration Act of 1993?

– Establish a national voter registration form that states must accept

– Offer the ability to register to vote in person at a designated Federal, State, or nongovernmental office, or at the applicant’s residential registration site in accordance with State law.

– Ensures that any eligible voter who submits an application by the registration deadline is, in fact, registered to vote for the upcoming election.

It is because of the NVRA that eligible voters can register to vote at their state’s Department of Motor Vehicles (DMV) earning the law the nickname “Motor Voter”.

It is also why eligible voters who submit an application by their state’s deadlines can vote in the upcoming election because it required states to process applications in a timely manner. The passage of the NVRA made registering to vote more accessible.

How did Rock the Vote contribute to the passage of the NVRA?

In the early 1990s, Rock the Vote launched a major national campaign to support the passage of the NVRA. We partnered with the Recording Industry Association of American, MTV, Rolling Stone, major artists and actors of the era, and elected leaders to record and broadcast PSAs, testify at Congressional hearings, and conduct public media interviews.

Rock the Vote teamed up with alternative rock band R.E.M. to include “Dear Senator. I support the Motor Voter bill.” postcards in the CD sleeves of their Grammy Nominated “Out of Time” album. As a result, more than 100,000 postcards were sent to Congress in support of the NVRA.

Did the NVRA have any other impact?

Absolutely! The passage of the NVRA was monumental in several ways. It required each state to designate a chief state elections official who would oversee the requirements of the NVRA. Note, many Secretaries of State who oversee the state’s Department of Motor Vehicles are also the state’s election official meaning they are also in charge of the elections in that state.

The new law also ensured that any person who “intimidates, threatens or coerces any person for registering or voting” would face criminal penalties.

The NVRA also required states maintain accurate voter rolls and included important protections for voters, such as ensuring that voters could not be removed from voter rolls except under the following conditions: death, criminal conviction, mental incapacity, change in residence, or voter request.

As a federal law, did the NVRA apply to all states?

No. At the time of its signing, six states either did not have a registration requirement or offered same-day/election-day registration. As a result, these six states did not fall under the NVRA. These states included Idaho, Minnesota, New Hampshire, North Dakota, Wisconsin, and Wyoming.

How did The National Voter Registration Act set the path for voter registration today?

Users’ information would be pre populated in a pdf of the national voter registration form. The pre-populated form was emailed to the user who also received the address of their state election official and instructions to print, sign and mail it. This gave third-party civic engagement organizations an efficient and effective way to support voter registration nationwide.

Rock the Vote has continued to innovate our Online Voter Registration platform, which has processed over 14 million registration applications to date.

The NVRA also paved the way for state-based policies that increase access to voter registration, such as:

– Online voter registration (OVR):  Enables individuals to register online at a time and place that is convenient for them.

– Pre-registration: Typically allows 16 and 17-year-olds to pre-register to vote so that they will automatically be registered to vote when they turn 18.

Independently and combined, these policies are incredibly impactful in closing the voter registration gap, particularly among young people, and would not have been realistic without the NVRA.

This key piece of legislation maintains an important role in ensuring the rights of voters to this day, and, since its passage in the early 1990s, it has helped millions of Americans exercise their most fundamental right as citizens of this nation.